Rika Akiba (秋庭 里香 Akiba Rika) is the main female character in the Hanbun no Tsuki ga Noboru Sora series. She has been hospitalized for most of her life due to a weak heart valve that also affected her father and ultimately killed him.

Rika is a beautiful young woman of short stature with lower-back length purple/black hair that has two white bobby pins pinned on the left side and purple eyes. She usually wears white pajamas when she is at the hospital and pink slippers.

Contradicting Rika's beautiful appearance is her rather rude personality where she is easily angered and bossy as she commands Yūichi Ezaki to do several things for her. Despite her cold exterior, she is very sensitive as she is easily hurt by others words or actions.

Due to her being constantly hospitalized, she has become isolated and is without any friends, which may have caused her cold attitude. 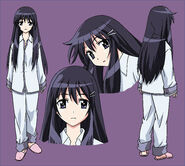 Rika's design in the anime
Add a photo to this gallery
Retrieved from "https://hanbunnotsukiganoburusora.fandom.com/wiki/Rika_Akiba?oldid=234"
Community content is available under CC-BY-SA unless otherwise noted.